The 2019 VRC Melbourne Cup is a Group I held over a distance of 3200 metres at Flemington Racecourse with total prizemoney of $7,300,000.The VRC Melbourne Cup was last run on Tuesday, November 6, 2018 and won by Cross Counter (GBR).

The 2019 Melbourne Cup is Australia’s most famous horse race held over a distance of 3200 metres at Flemington Racecourse in Melbourne. Held on the first Tuesday of November each year the ‘race that stops a nation’ is an opportunity to try and back a winner and claim bragging rights over your friends, work mates and family.

In 2019 the Melbourne Cup will be held on Tuesday 5th November at 3pm.

About the Melbourne Cup

If you’ve ever been to the Melbourne Cup, you’ll know why people often call it ‘The Race That Stops A Nation’. It doesn’t get any bigger or better than this.

The iconic annual horse race is a staple of the Australian sporting calendar. Each year, this highly anticipated event is held on the first Tuesday of November. This year, the Melbourne Cup is slated for 3pm local time on Tuesday 5th November.

The ultimate test of stamina and staying power, the Melbourne Cup is raced over a punishing distance of 3,200 metres. More gruelling than any other major event in Melbourne’s Spring Racing Carnival, the prestigious race places extraordinary demands on the contestants, and bestows exceptional glory upon the winners.

In addition to the huge Australian audience that drops everything each November to follow the race, the Melbourne Cup has also captured the imaginations of countless international racing fans.

With close to half of the field for the 2017 Melbourne Cup being raiders trained outside of Australia and New Zealand, the event has blossomed into a truly global affair. Australia does not have a reputation for breeding genuine stayers so, each year, the Melbourne Cup field features more and more internationally bred and trained horses. In recent years, international horses have dominated Melbourne Cup races.

For thoroughbred racehorses, the prestigious Melbourne Cup is the world’s richest handicap. The competitive landscape has changed considerably in Australia in recent times, leaving the Melbourne Cup as one of few authentic, two-mile horse races. The Andrew Ramsden Stakes at Flemington Racecourse and the Sydney Cup in NSW are the only other 3,200 metre Group 1 races on Australian shores.

Lasting for approximately three and a half minutes, the Melbourne Cup is the ultimate test of strength, speed and endurance. A Bart Cummings-trained horse called Kingston Rule famously obliterated the competition back in 1990 to set an all-time record of 3:16.30 minutes. Will that record be broken in 2019?

The paths that lead to the Melbourne Cup field have changed a lot in recent years.

Formally a contest fought out by the best stayers in Australia and New Zealand, the Melbourne Cup is now contested by horses from all around the world, with those from Japan and all across Europe having successfully mounted raids on Australia’s most famous race.

A newly-minted ballot-free race for the Melbourne Cup, the Andrew Ramsden is run in May over a distance of 2800 metres.

Currently known as the Lexus Stakes for sponsorship reasons, the Hotham is held over 2,500 metres on Victoria Derby Day – just three days before Melbourne Cup Day! Thus it’s basically the last chance for hopefuls to make their way into the field for the big race. 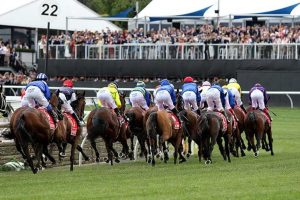 A 2,500 metre handicap held on Turnbull Stakes Day, the Bart Cummings has been a ballot-free race for the Melbourne Cup since 2015.

Whilst the jockeys, trainers and owners enjoy their fair share of recognition, it is undoubtedly the Melbourne Cup horses that are the real stars of the show.

The Melbourne Cup field typically comprises a star-studded array of both local and international horse racing champions. The horses that compete in the Melbourne Cup are chosen according to a range of parameters. Inferior racehorses are balloted out based on a range of metrics, such as handicap weight and performance in certain races.

Betting on the Melbourne Cup is one of the most Australian things you can do and millions of people have a flutter every year in an attempt to snare the win. Whether you back the favourite, make your pick by horse name, colour or number, when you’ve got something riding on the ‘Cup you’re going to have a great time.

Racenet has relationships with Australia’s leading bookmakers, including Sportsbet, BetEasy, and Neds and we encourage you to place your bets with one of these to make your experience easy and enjoyable. There are a multitude of betting options on the Melbourne Cup, from simple win bets (pick who will win) to exotics like trifectas (pick the first three horses) which can yield a big dividend from only a small investment.

To bet on the Melbourne Cup head to your local TAB to place a bet and receive a paper ticket to hold on to, or, skip the long queues and bet with an online bookmaker via their website or app.

All nominated horses have been given 2019 Melbourne Cup odds by bookmakers so punters can participate in what’s called ‘futures betting’. To bet on a horse before the final field is known is taking a punt that a horse will both make it into the final field of 24 and win.

The annual Melbourne Cup races have captivated and thrilled Australian and international punters for decades. Every year, new tales of triumph, heartache and struggle are added to the annals of Melbourne Cup history. Whether an unknown steals the limelight of victory, or a popular favourite takes a fatal fall, the history of the iconic race is chequered with an equal share of heart-rending and uplifting stories.

How to bet on the Melbourne Cup?

How to bet online for the Melbourne Cup?

For the Melbourne Cup, betting online is certainly the way to go. No one wants to wait in long TAB queues! Luckily, there are a number of popular online bookmakers, including Sportsbet and Neds, where you can bet online with. After you have chosen your bookie, the next step is to sign up and deposit some cash. With your account loaded up you can then place your bets.

When is the Melbourne Cup?

The Melbourne Cup will be held on Tuesday, November 5 in 2019. The winner of the 2019 Melbourne Cup will run approximately 3mins 20sec for the 3200m providing the track is good to dead. The current race record is 3:16.3 which was set by Kingston Rule in 1990.

What time is the Melbourne Cup?

The official Melbourne Cup race time and start times for other races on Melbourne Cup day will be released at the close of acceptances on the Friday before the race.

Where is the Melbourne Cup?

How many races are there on Melbourne Cup day?

There will be 10 races on Melbourne Cup day, with the first race at 10.40am and the last at 5.15pm. There is a break of 40 minutes between each race, with a longer break held before and the Melbourne Cup. Scheduled race times can vary depending on scratchings, horse behaviour and general lead-up formalities.

Looking for a Melbourne Cup tip? Racenet’s Melbourne Cup free tips utilise the knowledge of our expert tip team and industry-proven tipping formulas to help you back the right horse.

How many horses in the Melbourne Cup?

Because the Melbourne Cup is “the race that stops the nation” there are a high number of nominations (usually between 300 to 400 horses).

What distance is the Melbourne Cup run over?

The Melbourne Cup is a grueling 3,200 metres. It is a handicapped race for horses aged 3 years and above, with the minimum handicap weight set at 50kg.

Cross Counter won the Melbourne Cup in 2018. He was one of the youngest horse in the 2018 field, listed as 4 years old in Australia, but is actually a 3 year old in the Northern Hemisphere where he was born.

The jockey on board Cross Counter was Kerrin McEvoy and the trainer is Charlie Appleby. Cross Counter started from barrier  and it was his first start at the 3,200 metre distance.

Who came last in the 2018 Melbourne Cup?

Red Cardinal was the horse to finish last in the 2018 Melbourne Cup. No one likes finishing last, but many watch with interest to see which horse comes in last, usually for their Melbourne Cup sweep.

Red Cardinal also ran in the Melbourne Cup in 2017, where he finished a lot better in 11th. The jockey on board Red Cardinal was Kerrin McEvoy and the trainer was Andreas Wohler (now Darren Weir).

Is the Melbourne Cup a public holiday?

The Melbourne Cup is in fact a public holiday for those living in Melbourne, unfortunately for the rest of us, we will have to find some way to watch the race on a Tuesday at work. The race is dubbed as “the race that stops the nation” and no matter where you are in Australia there a Melbourne Cup themed parties and events.

Who will win the Melbourne Cup?

It is difficult to say who will win the Melbourne Cup, but not all 24 runners are in with an equal chance.